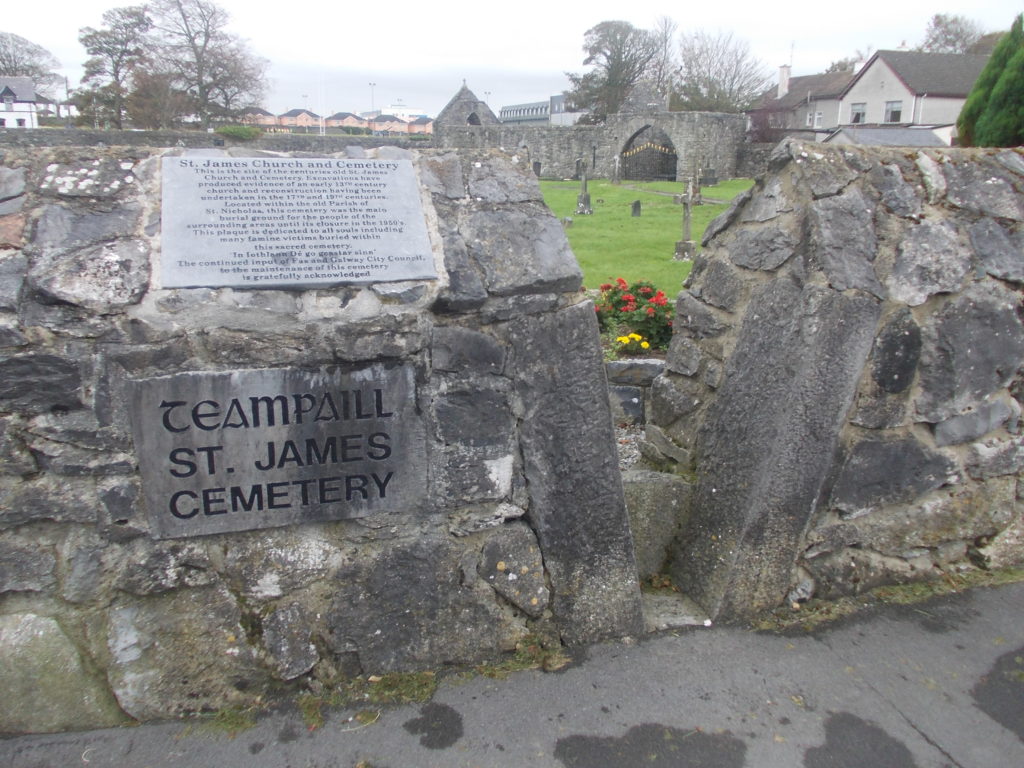 St James’ Church and cemetery in the eastern Galway suburb of Mervue was the subject of a survey and excavation led by Jim Higgins during the 1990s. The excavation and survey programme was funded by FÁS and Galway City Council. Jim published the results of the excavation at the church and the survey of the memorial inscriptions in a book Excavations at St James’ Church and Cemetery which was published by Galway’s Crow’s Rock Press in 1996. While attending the graveyard conference, The Place of Their Resurrection, organised by Jim recently in Galway city the Historic Graves Project discussed the possibility of geolocating the memorial stones in St James’ cemetery and publishing the geolocated photographs on the Historic Graves Site. The following week I undertook a quick geolocated photographic survey at the Graveyard. The memorials were numbered as per Jim’s graveyard plan allowing the information contained within Jim’s wonderful book to be cross referenced with the photographs published on the Historic Graves Site. The book and the online records are another great example of multiplatform publication where traditional and digital methods combine and complement in order to publicise the local heritage resource which is St James’ graveyard.

From the excavations and the associated assessment there appears to have been an early 12th/13th century phase of construction which was followed by a late 16th century early 17th century phase of construction. The church was also rebuilt for some function in the post medieval period. The early history of the church and graveyard is remarkably obscure and the earliest written record comes from the Ordnance Survey Letters for Galway which date to 1838. Jim believes there are three possibilities for the funding and function of the church; it may have been a minor dependency of St Nicholas’ Church in Galway City, it may have may have functioned as a small local parish church or it may have been a chapel funded by a large local landowner and used by the wealthy family and their tenants.

A section in the book entitled To Their Memory recounts in great detail histories and stories about the people and families buried in St James’ cemetery. The Lynch family and the Joyce’s were the largest landowners in the area. The church is located on land historically owned by the Lynches of Renmore House who have held land in the area since at least the 16th century when the family owned a castle at Doughiska. This castle is located close to the site of Renmore House the site of which is now a health service facility at Merlin Park. It is likely that the Lynches were responsible for the 16th/17th century additions to the church and were also responsible for the western annex which may even have been constructed as a family mortuary chapel – it certainly contains a 19th century Lynch box tomb.

The tomb at the western end of the main church building appears to belong to the Joyce family of Merview House and was one of the first funerary monuments to be built within the church.

Frank Joyce is commemorated by a cross located in the eastern end of the building and records the date of his death as 1890. Frank Joyce was a prominent member of the Galway Blazers and was married to one of the Persse’s a well known Galway distillery family who made whiskey on Nun’s island in Galway City. Frank’s father Pierce Charles Joyce had a fascinating army career in the Connaught Rangers and was close friends with T. E. Lawrence (Lawrence of Arabia). The Joyce’s along with Merview House also owned a smaller house which is located to the east of the graveyard boundary wall and now houses the club house of Galwegians Rugby Football Club.

The earliest recorded inscription (1864) in the graveyard was recorded on a now conserved box tomb located in the western half of the main church building which was dedicated to Fr James P. Geraghty who was a Parish Priest in Castlegar.

Local newspapers reported that the funeral of Fr Geraghty, who seems to have been highly respected was one of the largest seen in a long time.

Sean Mulvoy (Seán Ó Maolmhaidh) was a volunteer in Oglaigh na hÉireann who was shot dead by a member of the British Forces at Galway Railway station during an attempted raid on the Galway to Dublin train. Sean Mulvoy was buried in St James’ cemetery in September 1920 and a memorial headstone was unveiled by the Mayor of Galway Michael Higgins in September 1972.

One of the more colourful stories relating to the graveyard involves Tom ‘The Moor’ Molineaux or Black Tom Molineaux who was a champion boxer who died in Galway early in the 19th century and according to local tradition was buried in a grave marked only by a plain stone at the centre of St James’ cemetery.

As Jim Higgins declares in the opening section of To Their Memory, St James’ cemetery ‘contains a cross section of the population, rich and poor and of every class and political persuasion’. Some people were not commemorated at all and some graves were marked only by a rough uninscribed stone. The local historian Norbert Sheeran records that according to local people many who died during the great famine were buried in the cemetery and a stone cross has been erected in the graveyard to the memory of those who died at that time.

History of the Church

Building of the present Mervue Parish Church, which commenced in 1966 on property purchased from Galway Corporation, which also included a school site at a total cost of 7000 pounds. The church was the first completed in the city after Vatican 11 and on the 18 August, 1968, it was dedicated by the Bishop of Galway, Dr Micheal Browne, to the Holy Family. Fr. Jack O’Conner and Fr. Martin Coen were assigned to the new church. Prior to the opening of the church, Sunday Mass was held in the nearby Potez factory.

The plan of the new church was innovative with a major space constructed under the building set aside for community affairs. Consequently, the church has a rising railed walkway on either side leading to the raised entrance. Inside, the altar is located in the middle of the circular church, so that a congregation of 1,100 can be seated around it. The walls are of reinforced concrete, as is the roof, which has an outer copper surface. The architect was Patrick Sheahan and Partners, Limerick, the buider was John Sisk, and the total cost of the building was 190,000 pounds according to Tom May in Churches of Galway, Kilmacduagh and Kilfenora.

Major feature inside the church, after some alterations, include a mothers’ and children’s chapel and a Blessed Sacrament Chapel. Of special interest are the altar, lamp stand and ambo, which are made from Peruvian onyx. Meanwhile the shrines of St. Joseph and the Blessed Virgin Mary contain rather fine Florentine mosaics in the Byzantine style. Overhead, a large crucifixion scene painted on the cross by Italian artist, Giorgio Favella, a replica of St. Clare’s Cross in Assis, hangs directly over the altar, concentrating minds on the purpose of the Mass itself. Changing sunlight patterns also display the stained glass windows, by Phillis Burke of Dublin to best effect. They contain scenes from the Annunciation, Crucifixion and Ascension.

Outside the church, a fine grotto was erected by Fr. Joe Delaney with much financial help from the parishioners in 1980, while a small stone version was installed in 2000 next to it incorporating the treasured names of children who died prematurely. Of interest also is the shade provided by nearby trees, which, uniquely, were transplanted from their more formal setting in Eyre Square.